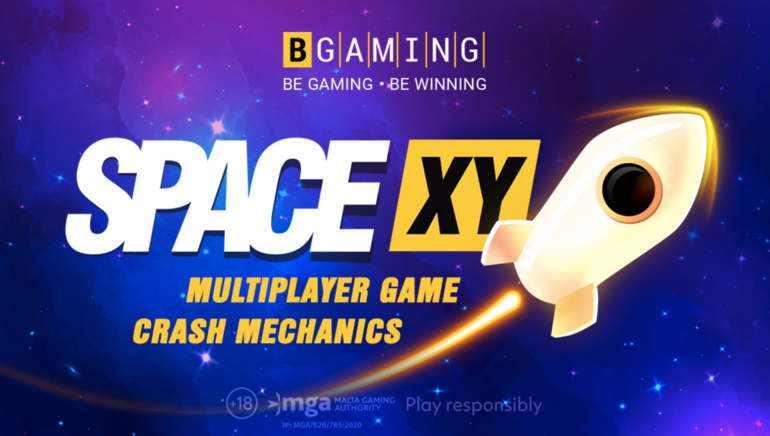 Embark on a quest in outer space with BGaming’s multiplayer crash game Space XY for a chance to win up to 10,000 times the investment.

BGaming is happy to announce the release of a game, one that represents a premier for its otherwise extensive portfolio. Space XY is a multiplayer crash game and the first of this type developed by the online casino supplier. It is already available at some of the flagship casinos powered by their software, such as CasinoRex and Bitstarz. Given its originality and extraordinary potential, the game is expected to soon feature at many more online casinos.

Aim for the Stars and the Profits

Space XY has very simple gameplay, but one that appeals to players because it keeps them in control. A rocket is being launched on XY coordinates, where X stands for the flight time and Y for potential profits. Players are supposed to ride the rocket for as long as they like and jump off before it disappears into space. Time is of the essence, but those who make the correct assessment can win many times the stakes and up to 10,000 times the investment.

BGaming’s multiplayer crash game allows players to place multiple bets and provide them with some useful features. For example, punters who have their strategy figured out can use the automatic cash-out instrument. Just as the name indicates, it allows them to choose the time when they take profit and have the algorithms do it on their behalf. The advantage is that you don’t risk missing out on anything and you can stick to your perfect strategy.

A Taste of BGaming’s Crypto Projects

Space XY is not only a new and original game but also one that fits nicely into their game package for crypto projects. The game is already popular among players who got the chance to try it at the online casinos currently offering it. This is great news for the software developer who plans on using this game as a springboard to more multiplayer mechanics titles. Currently, it is the only one in their portfolio, but inspired by his success, the developer is expected to persevere.

Players have plenty of other reasons to be enthusiastic about what 2022 will bring. The first game at the horizon is Aztec Magic, a MEGAWAYS™ slot based that is scheduled for release at the end of January. It will be available to partner casinos that currently use their software, with the network spanning over 700 operators. As for the software developer’s portfolio, it includes more than 70 titles defined by charming visuals and immersive gameplay.