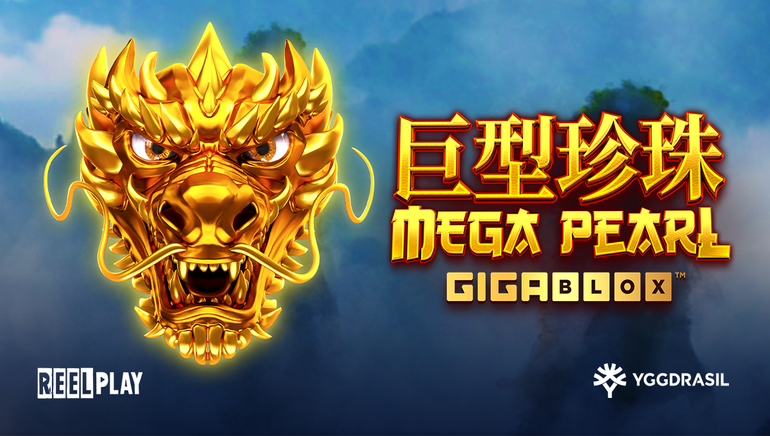 Megapearl Gigablox video slot is released as the latest part of the YG Masters program, with ReelPlay contributing yet another highly engaging and lucrative game using the patented Gigablox games engagement mechanic.

One of the world’s leading iGaming software providers, Yggdrasil, has again partnered with ReelPlay to develop an engaging and highly entertaining video slot game, Megapearl Gigablox.

The game was released on May 2 on major casino platforms and featured a distinctly Chinese theme with dragons, pearls, and other popular elements from Chinese folklore to drive the action.

Megapearl Gigablox employs Yggdrasil’s unique Gigablox games engagement mechanic, which allows for some huge wins and makes every spin extremely fun, with one giant symbol guaranteed on the reels.

The slot’s 40 paylines combine from left to right, with each of the six reels loaded with a variety of Chinese-themed symbols, including the Wild dragons, and the scattered Pearls, which act as the trigger for the game’s bonus.

When six or more pearls appear on the screen, three initial respins are awarded, with each further pearl appearing during the respins triggering extra spins.

The game features the Hold and Win style bonus, with pearls given multipliers based on your stake and further multipliers awarded when entire squares are filled with pearls.

It is also possible to buy the feature games in Megapearly Gigablox in jurisdictions where the regulators allow this feature.

Megapearl Gigablox is the latest of the ReelPlay powered slot games that were released as part of the YG Masters program. The game used the GATI technology developed by Yggdrasil to allow its partners to create slot games quickly and effectively, in accordance with the same high standard of the other games in the program.

Yggdrasil’s Head of Product & Programs, Stuart McCarty commented:  “We’re very pleased to collaborate with ReelPlay again to launch an exciting, Hold and Win style Gigablox™ title. The licensing of our GEM’s has expanded the potential of the program significantly and we look forward to seeing what further innovations will be created.”

ReelPlay CEO David Johnson further added:  “Megapearl Gigablox™ is another strong addition to our portfolio through the YG Masters program. Combining the popular Gigablox™ mechanic with a rich Chinese theme, ReelPlay has produced an engaging and re-playable slot experience for a wide audience.”